The Civil Committee for the Rescue of Political Hostages and Prisoners of Tajikistan (CCRPT) has lunched a media campaign demanding the release of the jailed Tajik activist Junaydullo Khudoyorov, who was detained on charges of “Salafism”. Campaign is being run with the following hashtag #Junaydullo_Khudoyorov

Muhammadiqbol Sadriddin, a member of the Board of the Committee, speaking on the beginning of the campaign said: Junaydullo’s fault was only that he publicized the corruption activities of the leaders of Rasht, his home district. He added that Khudoyorov’s accusation of links to Salafism is baseless and groundless. 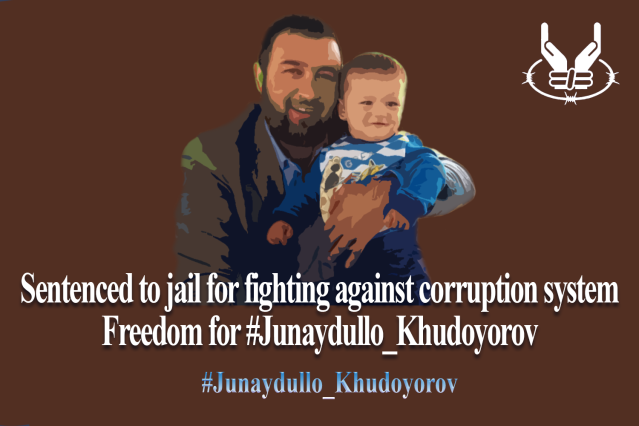 It is worthy to note that on August 31 the court of Ismoili Somoni district in Dushanbe accused Junaydullo Khudoyorov of Salafism and sentenced him for five years in prison under Criminal Code article 307, part 2, which is “organizing an extremist organization”.

According to Radio Ozodi (the Tajik service of Radio Free Europe/ Radio Liberty), Junaydullo, his family and his lawyer consider the verdict of the court as unfair and declared their intention to challenge it in a higher instance. After conviction of Ismoili Somoni’s court on the evening of August 31, the brother of the convict Farhod Khudoyorov said in an interview with radio «Ozodi» that his relatives consider the verdict unjust and that the case against Junaydullo was fabricated. He stated that his brother had never been associated with Salafiya, a forbidden religious group in Tajikistan.

Junaydullo following leaving the courtroom in a short answer to a question from Radio Ozodi, said that he considered the decision of the court to be biased and denied involvement in Salafiya. In particular, he said: «The articles I wrote related only to various deficiencies of the district level and these publications have nothing to do with Salafiya.»